SRAC Grieves as Chairman and CoFounder Ted Keir Passes Away 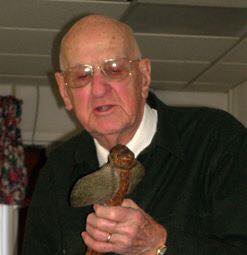 In 2005, a few citizens of the region dedicated to the preservation of the Native American past of our region came together and formed what we called the Susquehanna River Archaeological Center (SRAC). One of the most important people to be a part of that group was Mr. Ted Keir.

A few years prior to this I had begun researching Spanish Hill and during that work had met up with Ted Keir. Ted was known as the steward of so much knowledge of our region's history, geology, wildlife and archaeology. If you wanted to know anything about any of those topics, Ted was not only your guy, but he would also be the generous soul who would be happy to share it with your club, school, or any other group that wanted to know about it.

And so it was that I, like so many, ended up at Ted's house, and was invited into his "museum" he had in his cellar. I remember the awe I felt as I walked down those steps that first time, not only because I was welcomed into this special place with ancient artifacts placed in a mixture of lit cases, boxes and shelves, but that I was going to have a "special" tour from the master of this knowledge. That's how Ted made me feel from the first day that I met him...special. I mean there I was in awe of this guy who was an icon in our community - and HE made ME feel special.... and as I got to know him and see him with others, I knew that was his special God given gift... He just knew how to make you feel like what he was teaching you was a special gift, and that once he had gifted it to you, you were somehow better for it, and would hunger for more and more...

As I got to know Ted - I realized that all that he touched with his special gift of knowledge also gained a greater expectation of themselves. Ted was a gentleman and a prideful man, and being in his presence made everybody including myself stand a little straighter and think a little harder than we did before the day that we met him... Even as I speak to others about Ted today, there is a reverence and respect for him and our memories that we share about him. 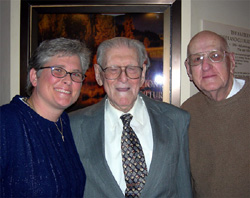 On our many trips through Bradford, Chemung, Tioga, and Broome Counties and beyond to meetings and presentations Ted shared with me all about his life, his family, his beliefs, his dreams and especially that his favorite ice cream was strawberry, and as the years passed not only did I respect him more and more, I LOVED him more and more...

Ted was in title SRAC's Chairman of the Board, but there are no words to express who he was and forever will be to all of us that have sat with him as we planned out SRAC's mission and vision for our community.

As we bought our building, and began to renovate and eventually moved his museum into the new SRAC museum that we had created, I was so proud to give him his new space where the whole community to could not only enjoy his collection with all the others that we have, but that he could share his special gift with them.  And the 4th graders that came for field trips made it clear year after year that Ted was a special icon of knowledge to them and their teachers... I can just hear his voice speaking above them to remind them about a specific point that he wanted to make sure that they would not forget after they left.."Children you must remember, ....." And then there was "Tuesdays with Ted" at SRAC where he gave tours from 1-5 week after week for years. He opened the cases and would tell his stories about how he found the artifacts as people held them, and would spend whole afternoons with just one family often. My favorite was always how he found 1/2 of a spearhead one year and the other half the next...still amazing! 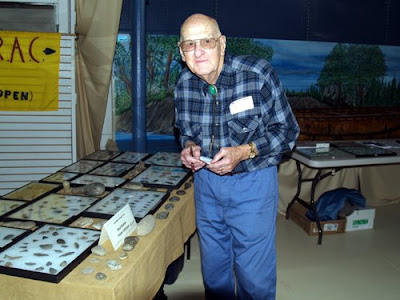 And then there came the time that we knew that Ted needed SRAC as much we needed him...

To those on the outside, it might have seemed like Ted worked too hard, stayed to long, and should have stopped working at SRAC years before he did, but WE knew, it was important for him to have SRAC as he began to get weaker and his memory started to fail... we knew it was what Ted wanted... he wanted to keep going, and he did as long as he could, and then we accepted that Ted could no come during the week. So then we brought him to US when we could... I am so happy that we got him out to our first SRAC excavation this summer - it was the highlight for many of us and I am sure it meant the world to him. 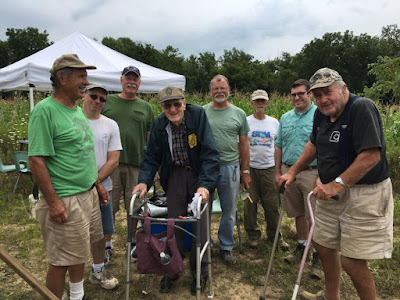 I talked with Ted just a few weeks ago on the phone and we talked for a long time, and I really thought he was doing pretty good, talking about specific sites, specific things, like the old days....and them I got the call from Evelyn his wife yesterday and I knew as soon as I heard her voice that my dear dear friend, my father in many ways, had left us. And my heart broke.

It will be a long time before this Valley sees another person the likes of Mr. Ted Keir folks. He will always be to me the smartest, kindest, strongest, gentleman that I have ever had the chance to have in my life, and will forever be an icon and a mountain of knowledge to strive toward.

We at SRAC will carry his torch and his dream forward, for our children, for our community, and most importantly, FOR HIM.

Thank you Ted Keir for being my mentor, my friend, and my guide for how I can be a smarter, kinder, stronger person. You will be missed more than you will ever know. Rest in Peace my dear friend. 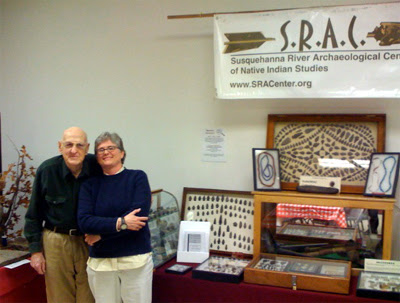 SRAC sends out our deepest sympathies and condolences to Evelyn, Deb, Jerry and the  rest of the family during this moment of great loss.

Services for Ted will be held at the Athens Methodist Church at 118 South Main Street Athens on Saturday, January 28th at 11am. SRAC members are asked to meet with us at 10:45 if you want to enter with us together as a salute to our Chairman of the Board one last time. Hope to see you there.
Posted by Deb Twigg No comments: