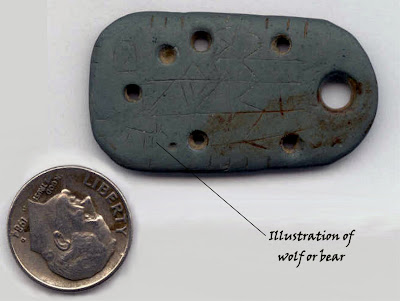 Blue slate amulet found locally and published in "Making Pictures in Stone."
"Making Pictures in Stone - American Indian Rock Art of the Northeast," was published by the University of Alabama Press, Tuscaloosa, Alabama and written by Edward J, Lenik. Lenik is a registered professional archaeologist and well-known author of several works concerning American Indian Rock Art. The book is an illustrated resource concerning rock art created by the Indians of Northeast America for research purposes. Remarkably, some of the examples used to represent notable rock art in the book is local rock art supplied to the author by the Susquehanna River Archaeological Center (SRAC.)

Rock art is a term used for various forms of human artistic expression by incising, etching, painting, pecking, or otherwise physically changing the faces of rocks or the walls of caves, or simply by moving or piling rocks on the landscape to form a design or pattern. Rock art subsets include petroglyphs, pictographs, engravings, geoglyphs, and petroforms.

The specific rock art from our region that was used in Lenik's recent book includes an animal effigy hearth discovered by Ellsworth Cowles in 1933, a "grid stone" tablet from the Ted Keir/ SRAC Collection, and a blue slate amulet from the Cowles/SRAC collection that is incised with many designs including a wolf or bear figure.

It is both exciting and very significant that our local archaeology is being used as a resource for ongoing research on a national level and this is just the beginning now that SRAC finally has their artifacts accessible to the public at our new Center in Waverly.

Anyone interested in learning more about these artifacts or others found in our region can visit SRAC at 345 Broad Street in Waverly, NY. The Center exhibits thousands of locally found artifacts and is open from 1-5 Tuesdays through Fridays and Saturdays from 11-4pm.

SRAC's next installment of History's Mysteries will be Tuesday, January 6th from 6:30 - 7:30 pm at the Susquehanna River Archaeological Center (SRAC) at 345 Broad Street in Waverly, NY.

SRAC's Ted Keir will present information and show actual photos from many archaeological excavations in Northeastern PA and Southeastern NY. Many artifacts from these digs will be on display and collectors who want to display locally found artifacts at this event are welcome to do so. (Doors open at 6pm for setup of any displays.)

The admission price of the event will be $4 for adults, and $3 for students and SRAC members. The SRAC Exhibit Hall filled with thousands of locally found artifacts will be open at 6pm and will be free to view by all event attendees.

What is this artifact?

As I go through the SRAC collections, I come across artifacts that just make me have to wonder....and so I am going to ask you to wonder along with me...

This artifact is from the SRAC/Keir collection and was found at the foot of Spanish Hill in South Waverly, Pa. It is a strange shaped rock with a very small hole pecked through it - - halfway from each side of the rock... 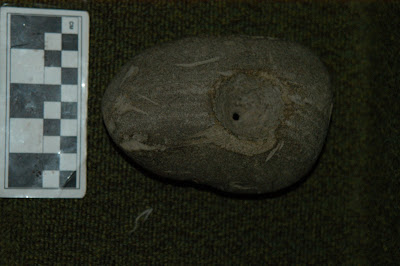 here is the flip side: 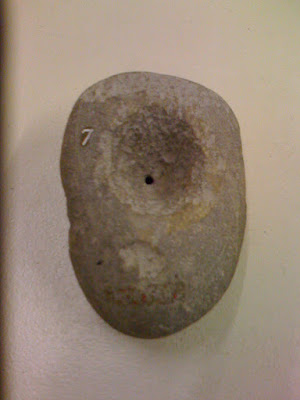 Oh yeh - I also found two others like this in the SRAC Exhibit Hall display cases right now... 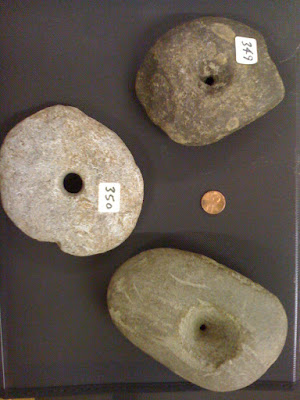 Note: we only display a small portion of all of our artifacts so I would suppose that we have a few more yet in storage....

First note that the one on the furthest right is made of steatite (soapstone), the center is drilled, and the shape is quite round which may make this entirely different, but because I couldn't find anyone who knew what it was either, I threw it into the mix as well...

From "The Sacred Scrolls of the Southern Ojibway" by Selwyn Dewdney;

"Then his tongue went through as if it were a bullet shot out of rifle. It went right through to the other side. He went right through the little hole and then came out on the other side and took this Life - this Everlasting Life that he was carrying. After looking around he didn't see no earth - nothing. So he got out, he found another wall. He did the same thing- stuck his tongue out and it went right through as if it were a bullet shot out of a rifle. And in that hole he went through with this Pack he had - heavy Everlasting Life. And when these people saw this (here Red Sky pointed to the found manitos stationed around each of the introductory circles on the Migration Scroll) the manito at the east, the manito at the south, manito at the west and manto at the north, they thanked him for the work " 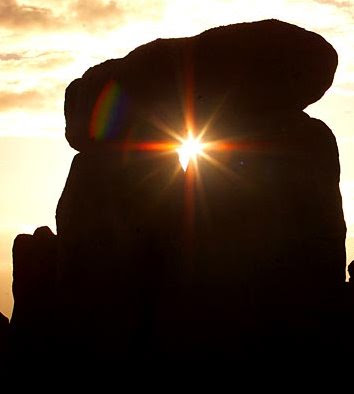 The problem that I have with most of these theories is that the holes do not show any signs of being worn down ... what I mean is that the inside edges of the center hole is as sharp as many points we have on display being struck out from both sides. 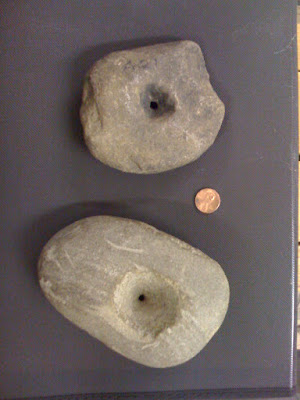 However the one side of the artifact from Spanish Hill does show some marks that run across the face of it, sort of anyway, so that it could have been tied to something, but not through the hole...

As I looked out on the internet, I saw that others are asking the same questions as I am - and so I thought I would post this in the hopes of starting a discussion and possibly helping many learn more about these strange artifacts.

Please send your comments by clicking the comments link at the bottom of this posting...You can send them with your name or anonymously.

Together we will always know more than any one of us! Thanks in advance for adding to the discussion! 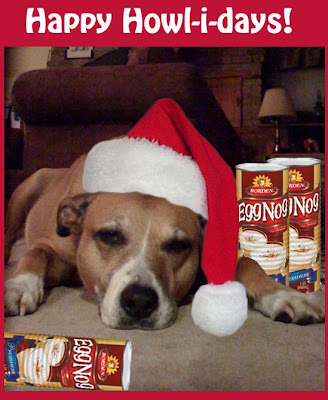