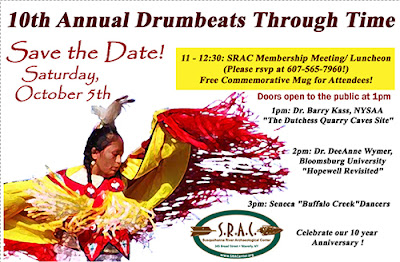 (WAVERLY, NY) The Susquehanna River Archaeological Center (SRAC) is announcing their tenth annual “Drumbeats Through Time” event which  is planned for Saturday, October 5th from 11- 4pm at 345 Broad Street in Waverly, NY. The event, which is a celebration of their Center, their mission, their supporters and the region’s Native American past begins at 11 am with a SRAC membership luncheon that will be catered by the Waverly Methodist Church, and includes prizes and gifts exclusively for the SRAC members.

At 1pm, the doors open to the public and the first speaker of the event will be Dr. Barry Kass, Professor Emeritus of Anthropology at Orange County Community College,  S. U. N. Y., in Middletown, NY,  where he has taught various courses in anthropology, sociology, and  human geography for  more than forty years. Dr. Kass will present, “Quarry Caves Site near Florida, N.Y.: Key Archaeological Discoveries of the Earliest Inhabitants of the Lower Hudson Valley in New York State.” The site yielded an extraordinary archaeological assemblage ranging from the PaleoIndian to the Woodland stage. Most noteworthy was the discovery of a classic Cumberland fluted point, dated through association with caribou bones found at the site, which provided one of the earliest carbon dates for human occupation in the Americas. The archaeological material will be illustrated and described, and historic photos of the early excavations will be shown.

At 2pm, SRAC advisory board member,  Dr. Deeanne Wymer, professor of Anthropology at Bloomsburg University will give a presentation on the excavations she led in 2012 on a Hopewell ceremonial mound site that had numerous significant features that will be discussed and shown on screen. SRAC’s Deb Twigg commented, “Dr. Wymer has been with SRAC for many years and has given a handful of presentations in that time that always are popular and in fact I still refer to in many of the tours that I give at SRAC.”

At 3pm, SRAC welcomes back the national award winning Seneca “Buffalo Creek Dancers”, who regularly close the Drumbeats event  and have become the ambassadors of the Native Americans during the event, sharing their history, culture and friendship with the audience who are invited to take part in some of the dances as well.

The whole event is free to attend and the SRAC Exhibit Hall will also be open and include several local private collections that are not normally on public display.  Twigg added, “This truly is a huge celebration of SRAC and what we stand for, filled with friendships, education, and of course representation of the Native Americans that we all include as a part of this region’s local heritage. There’s just nothing like this event anywhere else around, and I hope the public comes out and supports our efforts.”
Posted by Deb Twigg No comments:

(WAVERLY, NY) "JFK at Guadalcanal" will be presented by Greg Grund at the Susquehanna River Archaeological Center at 345 Broad Street in Waverly, NY on Tuesday October 1st, from 6:30 - 7:30 pm. Lieutenant John F. Kennedy's encounter with a Japanese destroyer on the night of August 1, 1943, may be the most famous small-craft engagement in naval history, and it was an unmitigated disaster. At a later date, when asked to explain how he had come to be a hero, Kennedy replied laconically, "It was involuntary. They sank my boat."

The Grunds embarked on their incredible journey and actually found out the 2 natives were still alive and subsequently made it a point to visit them and thank them for their services during WWII. This presentation includes slides and video of the Grunds meeting with Biuku and Eroni and stepping foot on the 2 islands that the PT-109 crew swam to after their ship sunk. as well as Rendova , the island were JFKs PT boat was based out of. This presentation promises to be insightful to even those who have followed this incredible part of WWII history as the Grunds claim that the natives told them things about the rescue that have never been written in any history books. Visitors are invited to come early as there is limited seating for this event, and to take time to visit
Posted by Deb Twigg No comments: