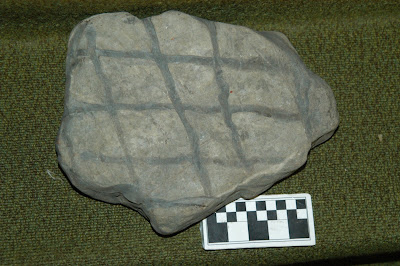 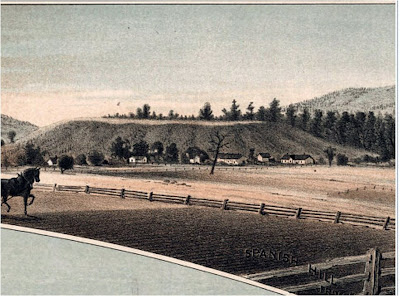 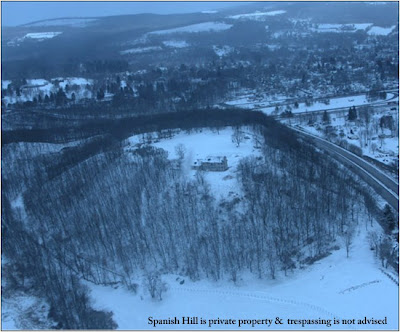 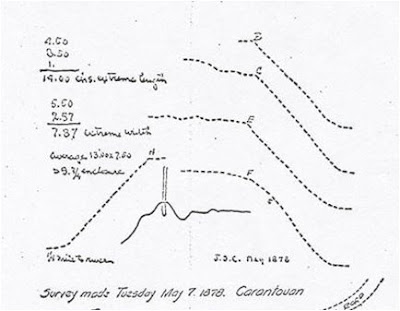 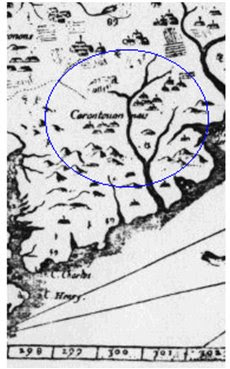 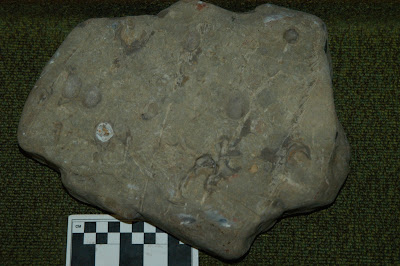 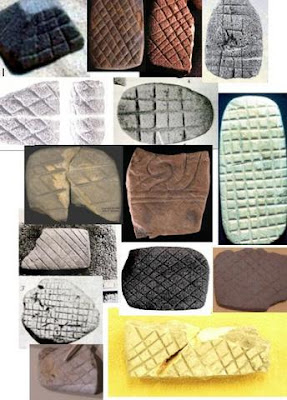 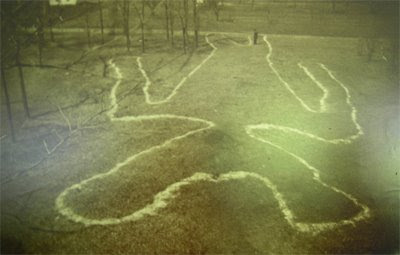 Saturday, August 9th, 2008 was officially declared to be "Man Mound Day" just outside Baraboo, in Greenfield, Sauk County, Wisconsin. I was proud to represent SRAC at this very important event.

The Man Mound is a huge effigy mound in the shape of a man with horns. (Can you image the look on the face of the first settler who happened to find this mound?) While I am sure it was known for quite a while by locals, the first time that the mound was surveyed was in 1859 by William H. Canfield. 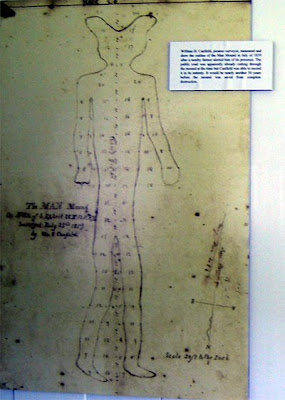 The mound is 214 feet long and the width at the shoulders is 48 feet. Although I am sure it was alot higher centuries ago, it's highest point is only around 3 feet now.

Of course while the Man Mound is largely unique, the effigy mounds of Baraboo Wisconsin took many shapes: 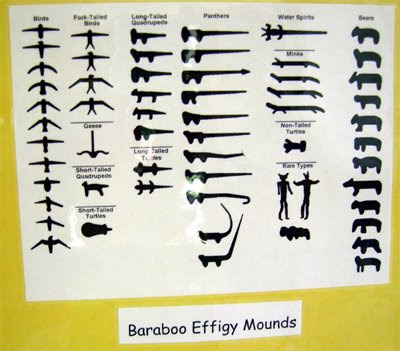 Image provided by the Sauk County Historical Society
My opinion is that the majority of these mounds represent the thunderbird (Sky Spirit), the Waterspirit, and those creatures that roam the earth. A handful such as the Man Mounds and Bird Man Mounds though take on human form, and to me by doing this seem to represent a person who may have been powerful in that spirit power. For this reason, I would suggest that these man-like mounds may have been made to honor a person, as opposed to others shapes like the Thunderbirds or Waterspirits which seem to me to honor a spirit. It should be noted that several small conical mounds also exist here as well.

It also should be noted that this mound is clearly walking - headed directly west. The west is the place of the water spirit, and this is best illustrated by the fact that it is where the sun on a daily basis is able to enter the world under the surface of the earth...by setting below the horizon. The next time you watch a sunset, I hope that you consider an ancient people full of superstitions and little science, and watch the sun as it "goes under the earth" As a result, it isn't hard for me to see why this particular man mound is walking towards the west.

There were in fact a handful of Man Mounds recorded to have existed, however, this one outside of Baraboo is the last one that exists today. 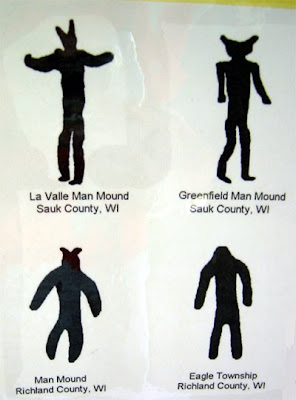 Image provided by the Sauk County Historical Society
At the time that of European settlement in the late 1830's Sauk County is estimated to have had up to 1,500 Native American Indian Effigy Mounds. By 1906, a survey by Arlow B. Stout reported that there were still 734, and 198 of those remained undisturbed while 300 had already been leveled. Today, only about 100 of these mounds still remain.

This mound in particular still exists because of the efforts of the foresight of people back in 1907 when they bought the Man Mound for what would be the equivalent today of $5,000.

The Man Mound Park was dedicated on August 7th, 1908. The following picture is from that ceremony 100 years ago, and the man with the beard and the hat sitting in the front there is W. H. Canfield... 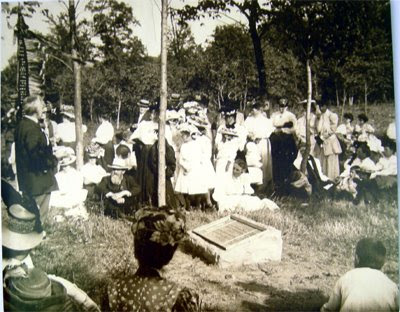 Image provided by the Sauk County Historical Society
W. H. Canfield actually did his speech again during the 2008 ceremony, with the help of one our new friends, Rob Nurre: 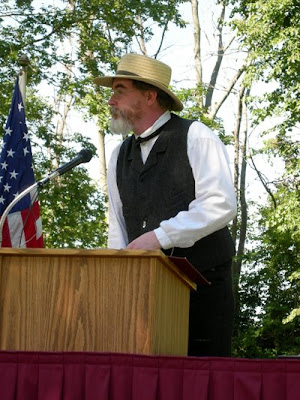 I hope to get a copy of the video of this whole event to post different pieces up on the web for you to see, stay tuned....In the meantime, my description of the event here will have to do.

The event was attended by around 300 people I would say and officially began with the Ho-Chunk Thundercloud Singers / Drum. Sauk County Historical Society president Paul Wolter ran the ceremony and many great speeches concerning the mound and the need to continue to preserve it were given to include representation by the Senate and Congress of Wisconsin. The Ho-Chunk Nation was also represented by their Vice President, Dan Brown. 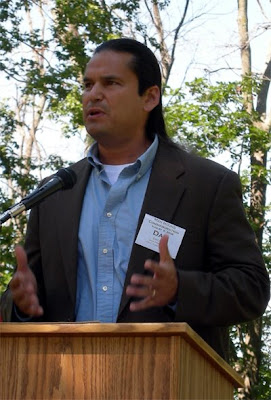 Also - before and after the event, people were invited to look at many displays under a huge tent to the east of the mound, where Susan Fogel and I represented SRAC and what became a very special and uncanny detail from Pennsylvania that drew quite a bit of attention from the professionals up there... 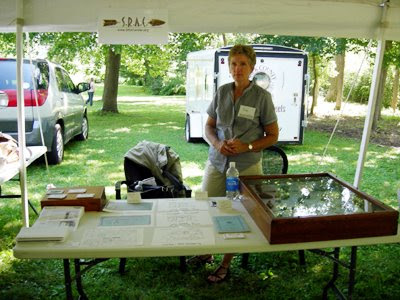 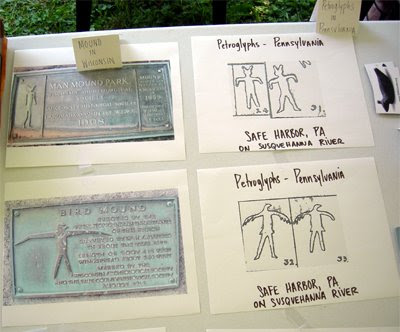 You see, although we don't have evidence of effigy mounds or the Fort Ancient culture in our region, I believe that the Man Mound AND the Bird Man Mound motifs both existed in Pennsylvania and so did everyone at the event after they saw what I brought with me(see above image) ...In fact many times we saw one person grab another by the arm and pull them over to our table to show them this new discovery, which I have been researching for over a year now...

These are the images that were once carved on "Indian Rock" along the Susquehanna River in Safe Harbor, PA - and as you look down through them, you will see the Man Mound shape and the Bird Man Mound shapes. 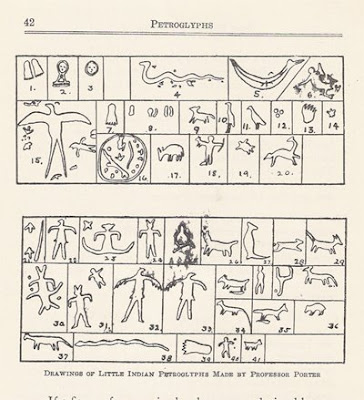 "Petroglyphs in the Susquehanna River Near Safe Harbor, Pennsylvania,"
by Donald Cadzow of the Pennsylvania Historical Commission

Coincidentally, it was SRAC's own Ellsworth Cowles's engineering expertise that saved these petroglyphs at Safe Harbor from being flooded by a dam that was built!

Stay tuned for a full article concerning his whole topic in the upcoming SRAC Journal!