Pat and I walking around the Great Circle at Newark, Ohio in the summer of 2006.

When I visited the Newark site two years ago, my friend Pat Mason who is an incredible researcher on many topics and member of the "Friends of the Mounds" told me that the day before she was at the Great Circle and ran into some people who were checking out great sites like this for their vacation. When she asked them where they had been before visiting the Circle, they told her, "Spanish Hill" in South Waverly, PA....

As you might expect, Pat and I are close friends brought together by like situations only divided by state lines, and when she sent this to me this morning, I had to post it and say just how proud I am to know her and what changes her "Friends of the Mounds" group have been able to cause in just the past few years...

Here is a video of Newark's Octagon just two years ago with golfers of the "Mound Builder" Golf Course making good use of it: Click here.

News Release
COLUMBUS, Ohio – The Ohio Historical Society Board of Trustees today took action regarding three of its sites at its regularly scheduled board meeting at the Ohio Historical Center in Columbus. The sites affected were the Newark Earthworks in Newark, Seip Mound in Ross County and Schoenbrunn Village in New Philadelphia.

o To seek approval from the General Assembly to transfer ownership of Seip Mound State Memorial to the National Park Service. Transfer to include preservation easement or reversion clause.

o To authorize staff to enter into an agreement with Dennison Railroad Depot Museum, Inc., for the day-to-day management of Schoenbrunn Village State Memorial with the terms and details as established by staff.

“We think that these three actions are reflective of the Society’s continuing effort to maintain and improve access to the sites under its care while facing continuing budgetary pressures,” said William K. Laidlaw, executive director and CEO of the Ohio Historical Society. “The board has acted in the best interests of these three historic sites.”

Newark Earthworks - click here to see info about this site and my trip there
The Newark Earthworks is a complex that is 2,000 years old and at one time covered approximately four square miles. A people now referred to as the Hopewell built these enclosures sometime between 100 B.C. and 400 A.D. Scholars recognize it as the largest geometric earthworks ever created. Although much of it has been destroyed by more than a century of urban development, the most significant parts remaining are the Octagon, Great Circle and Wright earthworks.

In 2002-2003, as the Newark Earthworks Historic Site Management Plan was developed by the Ohio Historical Society, an advisory group, made up of members of the community, local officials, Native Americans and archaeologists, recommended that the site be turned over to the National Park Service. Because the Newark Earthworks is now being considered for nomination as a World Heritage Site by the U.S. Department of the Interior, the Ohio Historical Society is looking to increase access and resources for the site.

The study would examine the costs and benefits of management of all three units of the site (Octagon, Great Circle and Wright earthworks) by the National Park Service and evaluate different ways that the site might be affiliated or become part of the National Park System. A similar study was conducted for the Hayes Presidential Center, an OHS site, in 1994, although no actions were taken following its completion.

With OHS approval, the National Park Service will be able to start its planning process. The study will not commit any party to any particular course of action. The OHS board, the legislature and Congress will need to approve any recommended steps.

-more-
Seip Mound
Seip Mound is the central mound in a group of geometric earthworks known as Seip Earthworks. The mound was built for burials by the Hopewell. About 10 acres of the site are for public use. ODOT has an easement on about 3.7 acres and maintains a roadside rest area, including restrooms, a picnic shelter and picnic tables. There is a small exhibit kiosk on the part maintained by the Society. The site also includes the Seip house, a brick residence built in the first half of the 19th century that is currently vacant. There is no OHS staff at the site.
Following analysis of Seip Mound as required by the Society policy and the holding of a public meeting on April 21, OHS staff recommended that the site be transferred to the National Park Service. The agency currently owns the remainder of the earthworks, so transfer of the property would unify control under one entity.

The National Park Service has the ability to accept the park without further congressional action as provided in the legislation that established Hopewell Culture National Historical Park in 1992. Although the site is owned by the Ohio Historical Society, it will need to seek approval of the General Assembly as required by Ohio Revised Code Section 149.30.

Schoenbrunn Village
David Zeisberger, a Moravian missionary, founded Schoenbrunn in 1772 as a mission to the Delaware Indians. Problems associated with the American Revolution prompted Schoenbrunn's abandonment five years later in 1777 and resettlement of its occupants. Its history features a rare meeting of Indian and European cultures and a fascinating perspective on the American Revolution. Today, the reconstructed village includes 17 log buildings, gardens, the original mission cemetery, and a museum and visitor center. Two picnic shelters, long enjoyed by the community, have been closed.

The Dennison Railroad Depot Museum, Inc., approached the Ohio Historical Society in May to manage the site. Although the proposed change to a management agreement for Schoenbrunn Village was not part of the recent OHS budget reduction actions in April, the Society received their offer with interest because of the expected continuing pressure on its budget in future years.

The Ohio Historical Society administers the largest site system for any state historical organization. Using a local organization or agency has been a successful means of reducing the Ohio Historical Society’s operating expenses and keeping the site open to the public. The Society has been using managed partnership agreements since the 1980s. About half of OHS 58 sites are managed this way.

Employees at Schoenbrunn will be transferred to nearby Zoar Village. By increasing the staff at Zoar, site operations will be improved thereby enhancing the visitor experience.
The agreement is expected to be signed with the Dennison Railroad Depot Museum in the next two weeks. An announcement will be made at that time.

The Ohio Historical Society is a nonprofit organization that serves as the state’s partner in preserving and interpreting Ohio’s history, natural history and archaeology. For more information about programs and events, go online at www.ohiohistory.org. 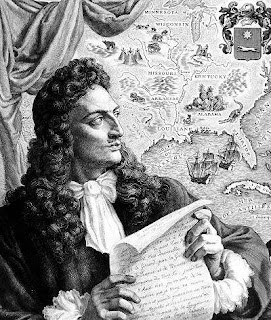 The Susquehanna River Archaeological Center (SRAC) is proud to announce the next installment of their educational series, “History’s Mysteries” will be another little known and mysterious piece of our local history titled, “The Great Detour,” presented by Dick Cowles. Cowles will present research that he and his father, Ellsworth Cowles did concerning yet another French explorer in our region, Rene Robert De La Salle. Cowles believes that in the 1670’s LaSalle searched for the corridor to the Mississippi River through our region, and as a result leads us to some interesting questions:
- "Did LaSalle actually discover the Mississippi River two years before the Jesuits, Marquette and Joliet made the claim?"

And even more importantly to local historians:

- "Does the the Cowles' research prove that LaSalle visited Spanish Hill's “Carantouan” nearly 60 years after Brule?" 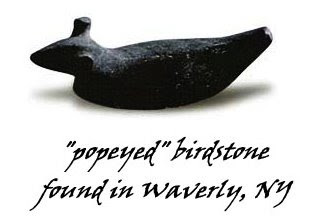 The birdstone is a very rare and unique artifact that any museum would be lucky to have one in it's collection. That is the why SRAC is hosting a Birdstone Roundup" and believe that for one day we will give the public a chance to see more birdstones in one place than you will be able to see
anywhere else regionally!

In addition, we are calling out to all collectors to bring their birdstones from around the region. SRAC's membership alone has many birdstones to display!

Anyone wishing to display their birdstones at this event are asked to contact Deb Twig asap at (607)727-3111 or by replying to this email. Secure setup for collectors is from noon to 1pm. Join us for a very rare afternoon of sharing and learning.

Remember that we are always adding events and the best way to keep track of all we are up to - - visit us online at http://www.sracenter.org/events/