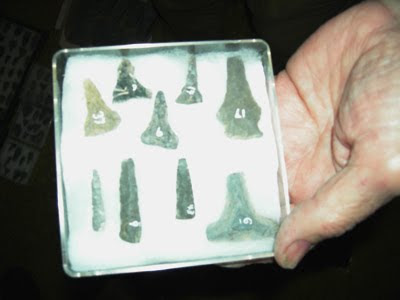 Drills from SRAC's Fox collection
One of the most interesting artifacts at SRAC to me are the stone drills. While these tools were made from many materials such as antler, bone, and later even metal, the workmanship in the stone drills on found in NY and PA and on display at SRAC are certainly worth discussing.

Just like the points used for arrows and spears in our region, the drills had alot of different styles and shapes during the many thousands of years they were created and used. In fact, it is believed that some of drills were actually points that were modified from their original shapes to create the drills.

Below are the illustrations of bases of some stone tools.... and I have to say that they indeed look like the bases of many points we have at SRAC...

But they are instead the bases to the following drill shapes. 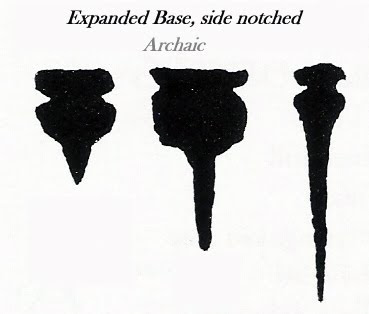 In some cases, such as the following it is difficult to determine if the specimen was used as a point or a drill. Some say that drills will give themselves awya by showing extra wear that a point normally would not... 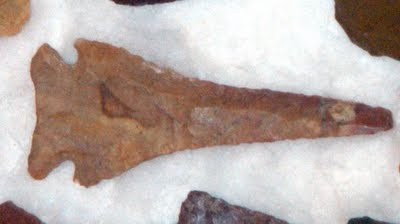 Keir/SRAC Collection
Here are some more drills- and these ones have always made me wonder how they could be used without breaking them as some of these are incredibly long and fragile... 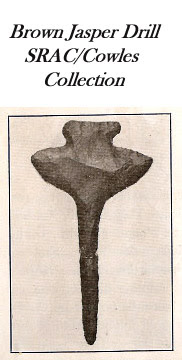 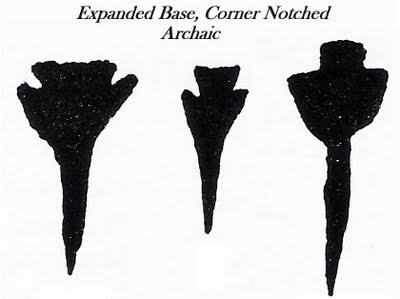 But all stone drills found in our region do not have a specific design to the base on them. Some are much more rough in design and are believed to be made from scrapers or miscellaneous flakes:

These are some from SRAC's member Jack Rowe's collection: 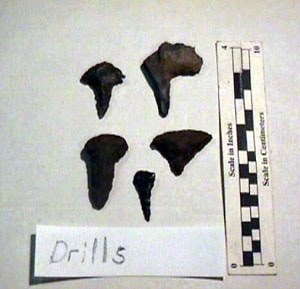 And still other drills have no base at all (these should not be confused with the broken end of another type of drill): 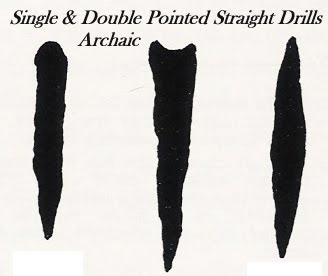 There are also many Y and T-shaped drills found in our region: 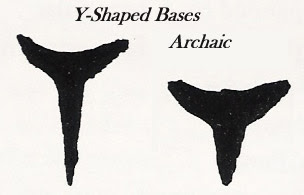 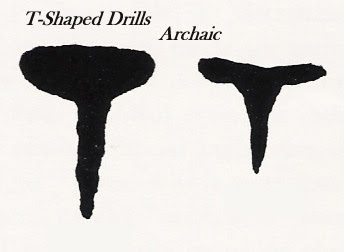 I hope that you find this information helpful, and as you peruse the collections in the SRAC Exhibit Hall, keep your eyes out for this rarely discussed artifact. You may not have noticed them before but once you do, you will find that they are more abundant than you thought! 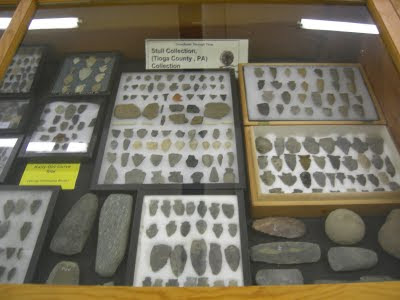 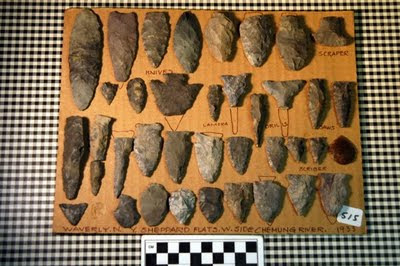 Well you knew it would finally come...While we have had many videos on our site, www.SRACenter.com for years now - I finally made a YouTube channel that can be found at:

You will also begin to see more and more videos acrossed our sites, including this video - which is in the "What's News at SRAC" playlist to run on our SRACenter.org main page:

My hope is that these clips will allow anyone to get to know SRAC better and see what incredible things are happening there everyday!
Posted by Deb Twigg No comments:

The Evolution of Military Arms and Tactics - by John Trice 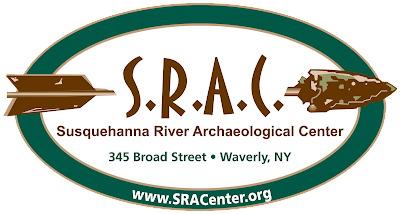 “The Evolution of Military Arms and Tactics ”
From the French and Indian war, Revolutionary War to the War of the Rebellion- by John Trice Tuesday, December 1, 2009 - 6:30 – 7:30pm
Susquehanna River Archaeological Center, (SRAC)
345 Broad Street in Waverly, NY.
(click here for a flier to share)
John Trice is the former D.A for Chemung County, current Appellate Counsel for New York State Supreme Court and Elmira College Instructor of Criminal Law. He will be demonstrating with period military artifacts.
The doors will open at 6pm, with the program running from 6:30 – 7:30pm. Admission is $5 Adults, $4 for SRAC members and students. The public is advised that the SRAC gift shop and exhibit hall will also be open during this time as well and to please consider arriving early to browse these areas before the program. For more information, call 570-565-7960 or email info@sracenter.org
Posted by Deb Twigg No comments:

Make Your Own Fused Glass Dishes! 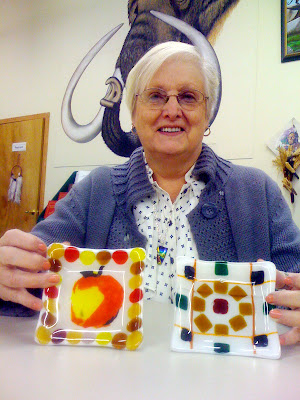 SRAC is offering workshops to help you get creative with your Christmas ideas this year and at an affordable price. The workshops will be held every Saturday in November and December until Christmas. From glass art to children's books, there will be a different workshop every Saturday at SRAC available to help participants make or get special gifts with all supplies and processing included in the registration price in most cases.


Those interested in attending the SRAC Special Christmas Gift Workshops are advised that additional workshops are still being added and can be viewed at: http://www.SRACenter.org/Events.

To register for any of the workshops - please call SRAC at 607-565-7960 Tuesdays through Fridays from 1-5pm or Saturdays 11am - 5pm. SRAC is located at 345 Broad Street Waverly, NY. Or email info@SRACenter.org!

Even before we had a building or a Center, Ron and Kris Wenning have been members and supporters of SRAC. Every year, they have also donated books to us to be able to sell high quality hard cover books with many titles that cover our region's early history. From "Indian Chiefs of Pennsylvania" to "Brules Discoveries" to "General John S. Clark's Manuscripts" - which was Louise Welles Murray's work, SRAC has been able to offer more resources for anyone interested in the early times of our region than any other organization because of Ron and Kris!

Last year, Ron and Kris had also brought at least a hundred books for us to sell at the suggested retail price and only took ten dollars per book back on many of them in consignment, giving us alot more than our usual 25% commission that we get from our gift shop commission items.

Recently, the Wennings contacted me and yet AGAIN amazed me with their incredible generosity! They donated the rest of the books that they had on commission with us!

In return - we have rolled that generosity back out to you - our supporters by taking $10 off the retail price on EVERY BOOK that we had on commission from Wennawoods!

If you are looking for a great book for yourself or for someone for Christmas - now is your chance to get a great hard cover historical book at a great price.

To learn more about Wennawoods and to see the much larger collection of books that they have available - visit their online store today! 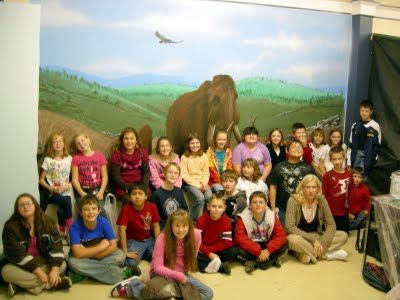 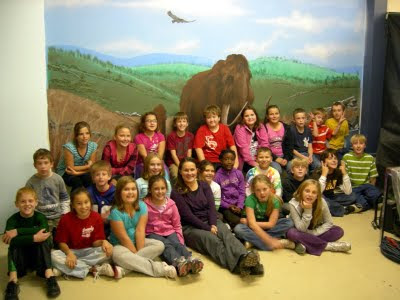 Waverly's Cathie Hand and her 4th grade class
The 4th graders at Lincoln St, School made a visit to SRAC today - and we had a wonderful time together! Thanks again to Robin Blauvelt and Cathie Hand - two great 4th grade teachers who shared in all of the fun and learning throughout the event!

And did I tell you what a great line up we had in store for the kids today? Thanks to our guys at SRAC for spending their time and knowledge to make today's event a wonderful childhood memory for many kids that they would not have made without you! 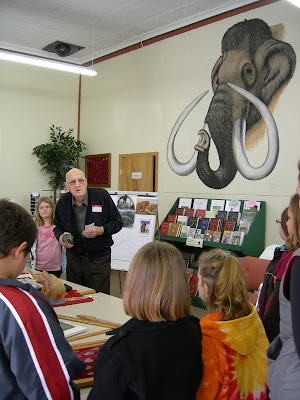 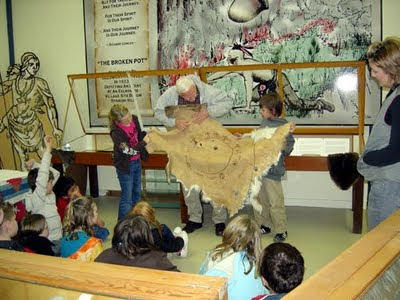 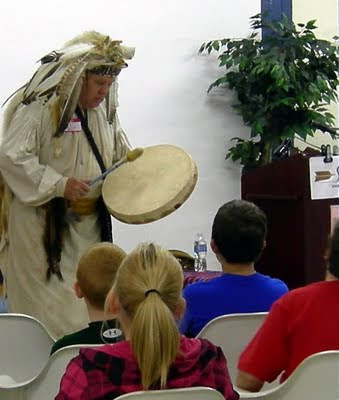 Station #3 - "Native American Children's Stories" - by Jack Andrus, SRAC
Thanks to ALL of you for making today a special memory for me as well!

A Visit at The Watering Hole.... 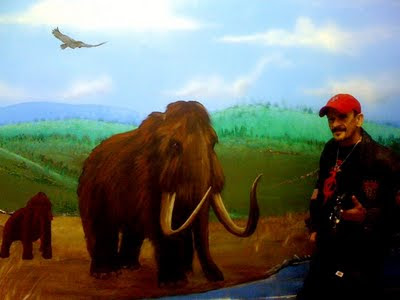 The Mammoth exhibit mural #1 is just a few days from completion. Although there is alot more that will be created around it and in front of it to include the excavation site with the ten foot long woolly mammoth tusk, teeth and jaw, and another even larger mural yet to be created by Peter, I cannot help but want to show you the 13 foot wide mural as Peter Quiles continues his work.

Here is the sketch of the entire exhibit we are working on: 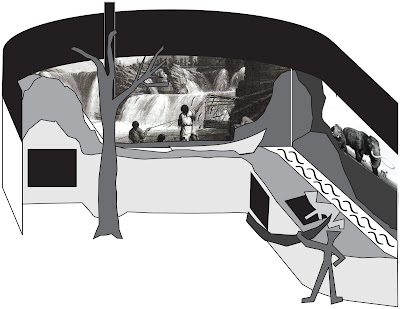 Again - SRAC members are invited to stop in and show their membership cards and ask to go back and see the exhibit that is not open to the public until it is completed.

If you are interested in supporting this project - please send donations to:

Thank you for supporting SRAC in whatever way you choose to and stay tuned for more updates soon!
Posted by Deb Twigg No comments: 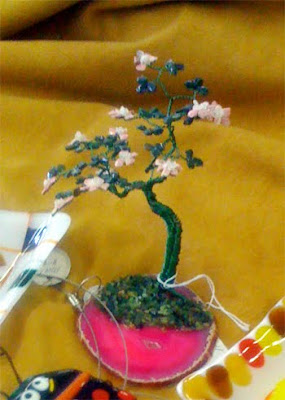 WAVERLY - Make a special gift for someone special this Christmas! Saturday November 14th, three 1-hour workshops will be offered at 11:30, 12:30, and 2pm at the Susquehanna River Archaeological Center (SRAC) located at 345 Broad Street in Waverly, NY. These workshops will be to create the ever popular gem trees with Inga Wells and all basic supplies are included. Geode slice bases also available for additional fee. Registration fee is $6, $5 for SRAC members.

To see the workshops offered every Saturday between now Christmas, visit http://www.SRACenter.org/Events, email info@sracenter.org or call SRAC at 607-565-7960. Due to limited space, preregistration is advised.
Posted by Deb Twigg No comments: 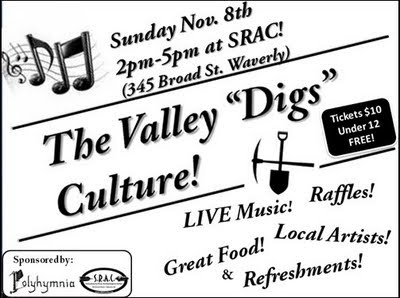 This Sunday is a wonderful time to learn more about two very special organizations in the Valley, the Polyhymnia club and The Susquehanna River Archaeological Center (SRAC) - who are teaming for a joint fundraiser and entertaining afternoon at SRAC.

I hope that you'll consider joining us for a rather different type of event for SRAC. "The Valley Digs Culture" which will tale place this Sunday, Nov. 8 from 2-5 p.m. at the SRAC at 345 Broad Street in downtown Waverly. A brief description of the entertainment planned for the event is described below -

Singer, song-writer,and recording guru Rob Spence will open the afternoon's entertainment at SRAC Sunday with some of his songs and talk about the life experiences that inspire them. Spence, who came to the Valley from England, makes his home in Waverly. He will be on stage at about 2:30 p.m. and the audience is invited to enjoy this opportunity to listen to one of the Valley's favorite performers.

Following a break for food, museum and gift shop browsing, the stage will be taken over by the dynamic Michael Debach, who plays and sings in many different styles. He will sing and play keyboard at about 3:15 p.m. and even lead a sing-along if the audience is in the mood.

Michael is part of the "family" when it comes to Polyhymnia Club, one of the sponsors for the Valley Digs Culture, planned for Sunday, Nov. 8 from 2-5 p.m. at the SRAC on Broad Street. He is a former winner of the club's performance award; his aunt, Mary Finlayson, is a current member, and he's the grandson of Jane Frederick, a Polyhymnia member during the 1950s and 60s.

The final performer, scheduled to take the stage after another break (about 4 p.m.), is Billie Risboskin, a senior at Waverly High School and the current winner in the instrumental competition. Billie will play the oboe along with a brief "introduction" to her instrument. Throughout the informal afternoon, food and beverages will be served and the SRAC exhibit hall and gift shop will be open.

A basket raffle featuring gifts from downtown merchants and music and other themed collections will be conducted. Music, the exhibits and food are included in the price of tickets ($10, with those under the age of 12 welcome at no charge).

Tickets, now available at SRAC, 345 Broad St., Waverly and from Polyhymnia Club members, may also be purchased at the door on Sunday. All are invited to come for a brief visit or for the whole afternoon.

The Valley Digs Culture event is a joint effort sponsored by Polyhymnia and the host Susquehanna River Archaeological Center and will benefit both organizations.
Posted by Deb Twigg No comments: